Add museum quality elegance to your virtual meetings and share your passion for the HSM&L with theses background images. Choose between Sophisticated Spaces, Sunny Spanish Scenes, Rare Books Reading Room and many more.

Please see here the instructions to set the images below as your background on Zoom, Microsoft Teams, and Snap Camera 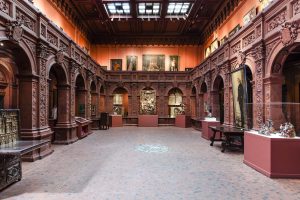 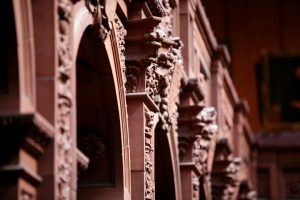 Upon entering the Hispanic Society, visitors are brought into a Spanish Renaissance-style courtyard composed of ornate architectural terracotta rising 35 feet high. Made by the Perth Amboy Terra Cotta Company of New Jersey, the designs on the arcade columns are based on the carvings that surround the windows of the early 16th-century patio of the castle of Vélez-Blanco in the province of Almería, now installed at The Metropolitan Museum of Art. Other ornamental features such as the leaf scrolls, grotesques, and Roman trophies were adapted from ornaments typical of the early 16th century, while escutcheons above each arch bear the arms of Spanish provinces and cities. The floors are paved with unglazed, hexagonal floor tiles of red clay produced at the Moravian Pottery and Tile Works of Doylestown, Pennsylvania, which was founded by Henry Chapman Mercer, a major participant in the American Arts and Crafts movement. These tiles continue throughout the galleries and the Reading Room. 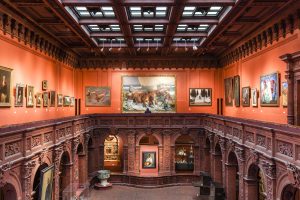 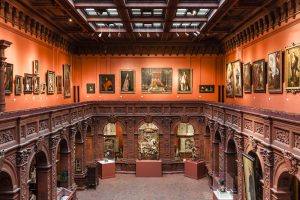 The Mezzanine provides a survey of five centuries of Spanish painting from the 16th century up to the early 20th century drawn from masterworks in the collection. Highlights from the 16th century include Portrait of the Duke of Alba (1549) by Antonis Mor, The Holy Family with the Horoscope of Christ (ca. 1562-69) by Luis de Morales, the anonymous portrait of The Family of Philip II of Spain (ca. 1583-85), and a selection of works by Domenikos Theotokopoulos, known as El Greco. From his period in Rome is Pietà(ca. 1575), and from his early years in Toledo are The Holy Family (ca. 1585), and the portrait Miniature of a Man (ca. 1578-80). Representative of El Greco’s mature works are Saint Jerome as a Penitent (ca. 1600), and Saint Luke (ca. 1600-05).

Works by Spain’s greatest painter, Diego Rodríguez de Silva y Velázquez, serve as an introduction to the Spanish Baroque with three portraits that exemplify major periods of his career as court painter to Philip IV. From his early period in Madrid is the portrait of Gaspar de Guzmán, Conde-Duque de Olivares (ca. 1625-26); followed by one of his most intimate works Portrait of a Little Girl (ca. 1638-44), dating from his middle period at court; and from his second visit to Italy is the portrait of Camillo Astalli, Known as Cardinal Pamphili (ca. 1650-51). Paintings featured on the Mezzanine by other 17th-century masters include Saint Lucy (ca. 1630) and Saint Rufina (ca. 1635) by Francisco de Zurbarán; Saint Paul (1632) by Jusepe de Ribera; The Prodigal Son among the Swine (ca. 1656-65) by Bartolomé Esteban Murillo; Via Crucis (1661) by Juan de Valdés Leal; Virgin of the Immaculate Conception (1670) by Juan Carreño de Miranda; and Marie Louise of Orléans, Queen of Spain, Lying in State (1689-90) by Sebastián Muñoz.

The transition from Old Master to modern in the late 18th and early 19th centuries can be seen in the portrait of A Spanish Princess (ca. 1794-95) by Agustín Esteve, and in the portraits of Manuel Lapeña (1799) and Pedro Mocarte (ca. 1805-06) by one of Spain’s most celebrated artists Francisco de Goya y Lucientes. The Romantic portrait of Jean-Auguste-Dominique Ingres (1833) by Federico de Madrazo y Kuntz, contrasted with the scenes of daily life executed in impressionistic brushwork of Arabs Ascending a Hill (ca. 1862-63) and Portico, Church of San Ginés (ca. 1868) by Mariano Fortuny Marsal, are illustrative of the stylistic evolution of painting in Spain in the 19th century. During the closing decades of the century many North American artists made pilgrimages to Spain to study the paintings of Velázquez. One of the most notable was John Singer Sargent, whose travels through Spain in 1879 inspired The Spanish Dance (1879-80) that concludes the selection of works by 19th-century artists.

Exceptional works by modern Spanish masters of the early 20th century begin with Joaquín Sorolla y Bastida and three of his most famous beach scenes, After the Bath (1908), Sea Idyl (1908), and the monumental canvas Beaching the Boat (1903), as well as the magnificent portrait of Louis Comfort Tiffany (1911). Quintessential paintings by the Basque traditionalist artist Ignacio Zuloaga y Zabaleta include Lucien Bréval as Carmen (1908), which the artist acknowledged as one of his best paintings, and the engaging portrait of his fellow Basque Miguel de Unamuno (1926). Representative of Catalan modernism are Calvario at Sagunto (1901) by Santiago Rusiñol, La Roser (1909) by Isidre Nonell, and Girls of Burriana (1910-11) by Hermengildo Anglada-Camarasa. The survey concludes with the expressionisticFishermen of Castro Urdiales (ca. 1917) by José Gutiérrez Solana, one of the most singular Spanish artists of the 20th century. 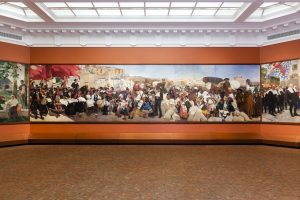 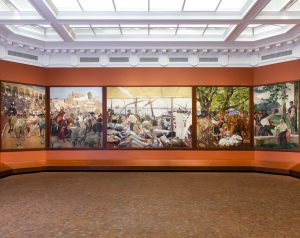 The gallery houses the monumental series of 14 paintings known as Vision of Spain by the Valencian master Joaquín Sorolla y Bastida, the preeminent artist in Spain at the turn of the 20th century. Archer Milton Huntington, founder of the Hispanic Society, commissioned the paintings in 1911 for a new gallery to be built on the west side of the main building. Sorolla already had been the subject of two enormously successful traveling exhibitions in the United States organized by the Hispanic Society in 1909 and 1911. The 1909 exhibition alone attracted some 160,000 visitors to the Hispanic Society in a period of one month.

Nearly 12 feet tall and 200 feet in combined length, the canvases that comprise Vision of Spain were painted by Sorolla at various locations in Spain between 1912 and 1919. Within the gallery the viewer is surrounded by the peoples, costumes, and traditions of various regions of Spain. Both Sorolla and Huntington noted that the series represented a Spain that was already “on the point of disappearing.” Unfortunately the paintings that Sorolla considered his greatest work were not inaugurated at the Hispanic Society until 1926, three years after the artist’s death.

All of the canvases were restored in 2006-2007 prior to an exhibition tour in Spain. Sorolla’s Vision of Spain was exhibited in Valencia, Seville, Málaga, Bilbao, Barcelona, and Madrid between November 2007 and February 2010. Never before on public view in Spain, Sorolla’s masterwork created a sensation that attracted over 2,000,000 visitors, making it the most visited exhibition in Spain’s history. The fully renovated Sorolla Vision of Spain Gallery was inaugurated in 2010 upon the return of the paintings. 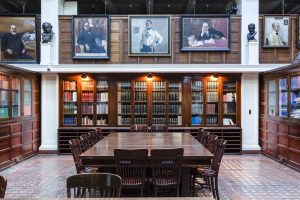 On exhibition in the Reading Room are a variety of works from the Hispanic Society’s collections. The most exceptional, which dates from the Age of Exploration, is the Map of the World (1526), an enormous portolan chart made in Seville by the chief pilot and cartographer of the House of Trade, Juan Vespucci, nephew of Amerigo Vespucci.

The Reading Room features works by Joaquín Sorolla y Bastida, including his unfinished painting of The Meeting of the Patronato of the Casa-Museo del Greco, Toledo (ca. 1910-1920), which portrays – among others – Archer Milton Huntington; Alfonso XIII, king of Spain; Benigno de la Vega-Inclán y Flaquer, Marquis of Vega-Inclán; and Joaquín Sorolla. Also exhibited in the Reading Room are portraits by Sorolla of leading writers, artists, and intellectuals of his day associated with the generations of 1898 and 1927, including Emilia Pardo Bazán, Benito Pérez Galdós, Juan Ramón Jiménez, Antonio Machado y Ruiz, Vicente Blasco Ibáñez, and José Ortega y Gasset.