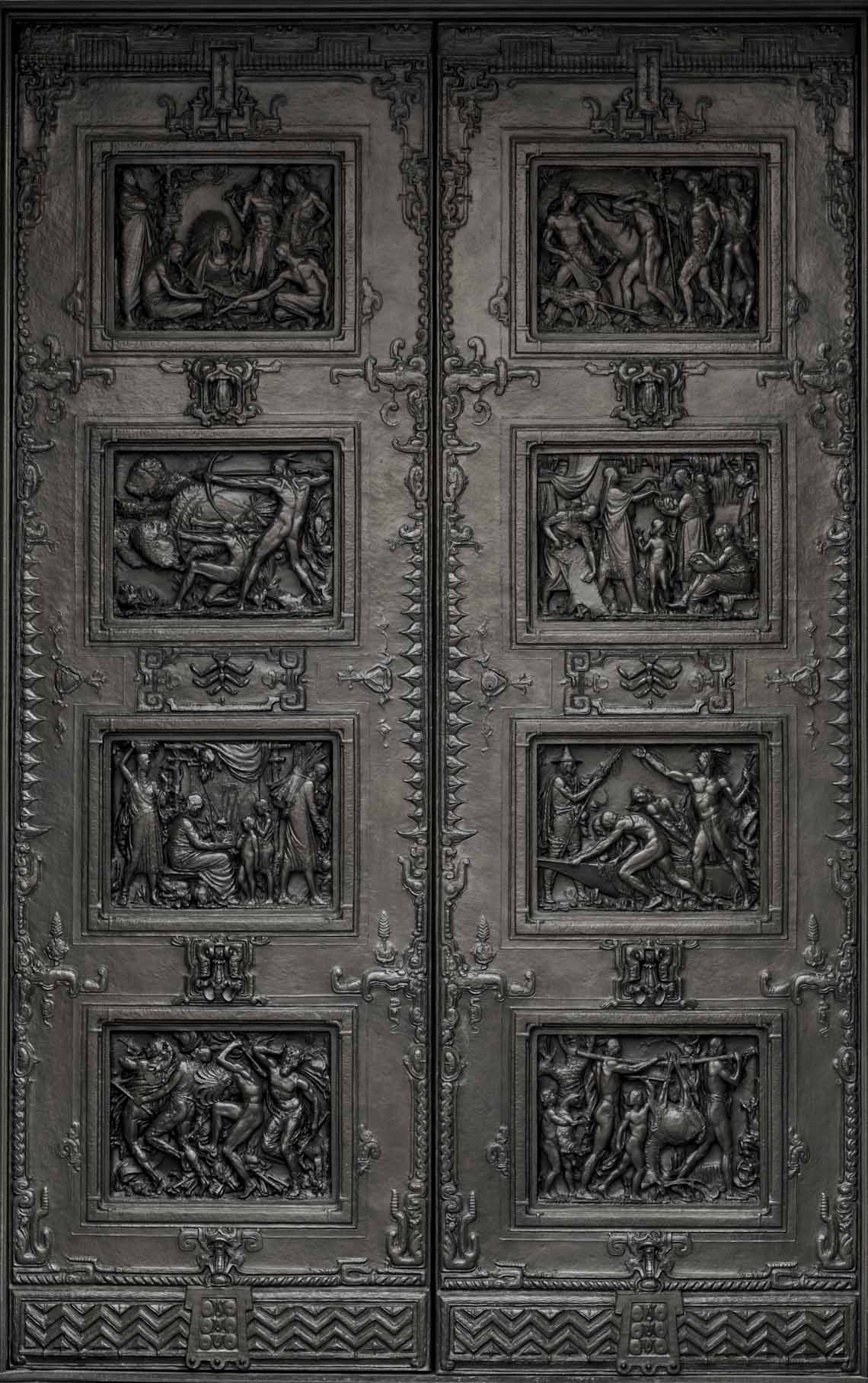 ABOUT THE NEBEL DOORS AND RESTORATION The monumental bronze doors by Berthold Nebel were commissioned in 1928 by Archer Milton Huntington, founder of the Hispanic Society, for the main entrance of the Museum of the American Indian, Heye Foundation.  The National Museum of the American Indian relocated in PRESS RELEASE  2  1994, and their building was acquired by the Hispanic Society in 1996 and renamed the East Building.  Cast in 1931, the doors were made in panels on the front and back, depicting individual scenes of Native American life. The themes addressed by the images include: the Council, Travel, Bison Hunt, Women of the Prairie, Home Life, Indian Fishermen, Religion, and Returning from the Hunt.  In May 2017, the bronze doors were fully restored by Conservation Solutions, under the direction of Monica Katz, Conservator at the Hispanic Society.   According to Mitchell A. Codding, Executive Director of the Hispanic Society, “the restauration of the Nebel doors comes at a pivotal moment for the Hispanic Society as we renovate our building, further develop our free educational and public programs, and celebrate the success of the exhibition, Tesoros de la Hispanic Society of America: Visiones del mundo hispánico (April 4 – September 10, 2017), currently at the Museo Nacional del Prado in Madrid. We are very grateful to American Express for making the restoration of the Nebel doors possible.”    “American Express is committed to preserving cultural assets that represent our country’s rich history,” said Richard A. Brown, Vice President, American Express Philanthropy. “The Nebel’s bronze doors reflect New York’s diverse past, and stand as a welcoming symbol to current Hispanic Society visitors. We are proud to help save this treasure for future generations.”

ABOUT BERTHOLD NEBEL Berthold Nebel was born in Basel (Switzerland) in 1889, and died in Westport (Connecticut) in 1964.  He came to the United States as a child, and became a naturalized citizen in 1907.  He attended James Earle Fraser’s classes at the Art Students League of New York.  In 1914, he won the fellowship of the American Academy in Rome.  Nebel was a sculptor of monuments, statues, and portraits, and a designer of medals.  In the 1920’s, Nebel invented a machine for enlarging and reducing tridimensional forms.  In addition to the doors to the former Museum of the American Indian (today the Hispanic Society’s East Building) and the former American Geographical Society (today Boricua College), Huntington commissioned Nebel in 1939 to design the relief panels on the south façade along 155th street.  The reliefs depict heroic figures of nine civilizations that occupied the Iberian Peninsula (Stone Age, Greek, Phoenician, Carthaginian, Celtic, Roman, Visigothic, Arab, Christian). Other works by Nebel include the statue of General Joseph Wheeler for the United States House of Representatives; the statue of Alexander Brown, the founder of a Wall Street investment bank, located at the intersection of Wall and Nassau Streets in Manhattan.

ABOUT THE HISPANIC SOCIETY MUSEUM & LIBRARY The Hispanic Society Museum & Library was founded in 1904 by Archer M. Huntington as a free public museum and library with the purpose of advancing the study and appreciation of the arts, literature, and cultures of the Hispanic world. Museum highlights include masterworks by 3  El Greco, Velázquez, Goya, and Sorolla; sculpture by Pedro de Mena and Luisa Roldán; Latin American paintings by Vázquez, López de Arteaga, Rodríguez Juárez, and Campeche; as well as masterpieces in all areas of the decorative arts. The Hispanic Society offers a variety of free educational and public programs.  The Hispanic Society was designated a National Historic Landmark in 2012 in recognition of the fundamental role it has played in the promotion of Hispanic art and culture for over a century.  In May 2017, the Hispanic Society was named the recipient of the 2017 Princess of Asturias Award for International Cooperation.

RENOVATION OF THE HISPANIC SOCIETY MAIN BUILDING The Hispanic Society closed its exhibition galleries on January 1, 2017, until the fall of 2019 in order to renovate the Main Building.  During this period, the library will remain open by appointment and the free educational and public programs will continue off-site.  More than two hundred of the most important works from the museum and library collections are on tour for a special exhibition titled, Visions of the Hispanic World: Treasures of the Hispanic Society Museum & Library, which is currently open at the Prado Museum in Madrid until September 10, 2017, and will continue to other venues in North America.

PLEASE NOTE TO YOUR READERS: Our galleries are closed until the fall of 2019 in order to renovate the Main Building. During this period, the library will remain open by appointment and the free educational and public programs will continue off-site.   Subway Directions: #1 to Broadway and 157th Street station, or the #C to 155th Street station.