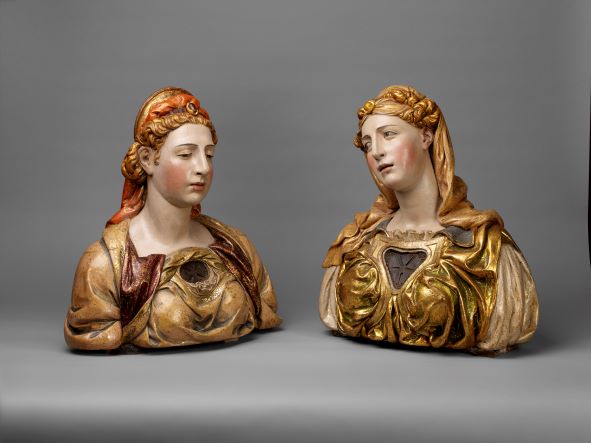 New York (September 2021) – The Hispanic Society Museum & Library (HSM&L) is pleased to present Gilded Figures: Wood and Clay Made Flesh, offering a rare glimpse of a major art form from the Hispanic World 1500–1800: polychrome sculpture. Curated by Dr. Patrick Lenaghan, Head Curator of prints, photographs and sculpture of the HSM&L, and Hélène Fontoira-Marzin, Head of Conservation of the HSM&L, the exhibition will open to the public on October 15, 2021, and run through January 9, 2022.
Building on the legacy which Archer M. Huntington left the museum, the institution has added to its holdings of this material so that today the HSM&L boasts the finest collection of these works outside Spain. Until recently, this vivid sculpture went largely unnoticed, but now, brought to light by the HSM&L, elicits enthusiastic response. Gilded Figures is the first event in New York City to feature this art form in the last 20 years. The more than 20 sculptures exhibited will not only attest to the high level of artistic production, but will also include major works by women artists and show how the stylistic conventions of Spain were adapted in the New World.

Gilded Figures will begin with late Gothic and early Renaissance works by the finest sculptors from Castile. Among these, a superb monumental relief of the Resurrection attributed to Gil de Siloe reveals the dazzling talent of those artists. How decisively Italian models shaped the work of following generations appears in the sixteenth-century reliquary busts by Juan de Juni. The Baroque period witnessed an impressive flowering in which figures like Pedro de Mena achieved effects of stunning naturalism as seen in his St. Acisclus. The exhibition will also draw attention to another consideration — the role of women artists — in a section of pieces by Luisa Roldán and Andrea de Mena. The first of these achieved spectacular success in her lifetime rising to the position of Royal Sculptor (escultora de cámara).
The last section of Gilded Figures will focus on sculpture from Latin America in this period, in works characterized by an impressive range of scale and emotion. A monumental sixteenth-century relief of Santiago matamoros (St. James the moorslayer) from Mexico reveals how Spanish models were transplanted and adapted to the needs of the Catholic church as it embarked on a campaign to convert the indigenous people. In addition to Mexico, Ecuador witnessed a flourishing of polychromed sculpture in which sculptors in Quito produced masterpieces. Painted with a vivid attention to detail, statues like the Virgin of Quito or St. Michael show the powerful effects these talented artists achieved. The exhibition concludes with perhaps the most dramatic display from this school, and one of the museum’s most recent acquisitions: Caspicara’s Four Fates of Man. In these figures, the Indigenous sculptor depicts a range of emotions with consummate skill and a delicate touch as part of a theological lesson to inspire people to persevere in their faith.
This exhibition has been made possible, in part, by the generous support of Barbara and Jon Landau, Colnaghi, Wolf Construction Corporation, an anonymous donor, as well as the trustees, patrons and members of the Hispanic Society Museum & Library.
If interested in learning more about this exhibition and/or planning your visit, please visit Hispanic Society Museum & Library and follow the institution on Instagram, Facebook and Twitter. Gilded Figures is open at the HSM&L from October 15, 2021 to January 9, 2022 every Thursday – Sunday from 12 – 6 p.m.