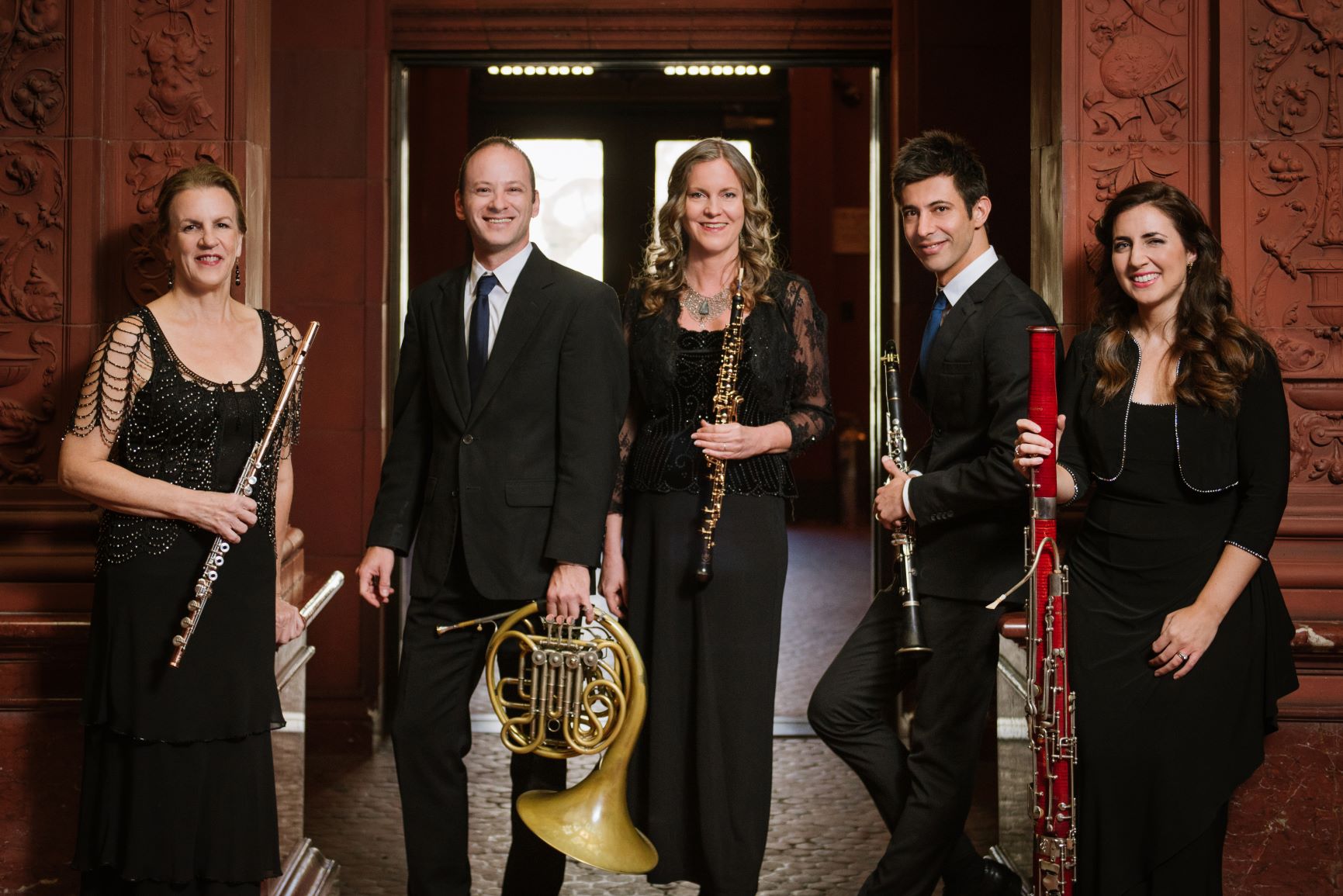 Voices of the Hispanic Diaspora by  Sylvan Winds

Sebastián Piana (Nov 26, 1903 / Buenos Aires – July 17, 1994) began his career at age 15 playing piano and conducting pit orchestras in the emerging field of music for film. He became professor at the Municipal Conservatory of Music in Buenos Aires and enjoyed great popularity with his tango compositions and music for theater and film.

Fèlix Astol Artés (Oct 9, 1813 / Reus – Jan 21, 1901 / Mayaguez PR) was a Spanish musician and composer from Catalonia best known for being the co-composer of the National Anthem of Puerto Rico. Born in Spain, he moved to Cuba in 1828 trying to avoid military service, but forced to enlist, he joined a battalion band. He made a living as a tenor in operas, touring Puerto Rico, but returning to Cuba. Joining the opera company of Stefano Busatti, he returned to Puerto Rico and began to write popular music. His most famous work composed in 1867 was a danza, called Bellisima trigueña, There were many versions of the piece throughout the Americas from Cuba to Brazil to Peru, but the most popular is La Borinqueña.

Juan Morel Campos (May 16, 1857 / Ponce PR – May 12, 1896), was a Puerto Rican composer, considered by many to be responsible for taking the danza form to its highest level. Born in Puerto Rico, his father was from the Dominican Republic and his mother was from Venezuela. He began studying music at the age of eight and learned to play almost all the brass instruments, eventually becoming the founder and director of the Ponce Municipal Band. He then studied composition and had his own dance orchestra. Best known for his danzas, he also wrote waltzes, marches, overtures, symphonies, and operas.

Manuel Ponce Cuéllar (Dec 8, 1882 / Fresnillo –April 24, 1948 / Mexico City) was a music prodigy when at age four he was able to play one of the pieces his sister was learning during her piano lessons. After studies at the National Conservatory of Music, he went on to study at conservatories in Bologna and Berlin. He returned to Mexico to teach piano and music history at the National Conservatory, and to devote himself to composition. He is credited with promoting music of the Mexican countryside and performing popular music on the concert stage. As a scholar of Mexican music, he was called the creator of the modern Mexican song. Many of his compositions are strongly influenced by the harmonies and forms of traditional songs.

William Grant Still (May 11, 1895/Woodville, MS – Dec 3, 1978/Los Angeles, CA) Called the “Dean of Afro-American Composers”, Still attended the Oberlin Conservatory and played and arranged for W.C. Handy while a young man.  He also studied with Edgard Varèse, held a Guggenheim fellowship, and broke many barriers during his career: being the first African American composer to write orchestral works and the first conductor of color to lead major American orchestras. His music incorporates a variety of African American styles, but he was also very interested in folk music throughout the Americas.

Arturo Márquez (Dec 20, 1950 / Álamos, Mexico) The son of a mariachi musician, his large family settled in Southern California. He studied music there, in Mexico, and on scholarship in Paris. He became internationally known after the Venezuelan ‘Sistema’ Youth Orchestra took one of his compositions on its European tour in 2007.

El más allá Yaravi is a musical genre defined by an indigenous Pre-Columbian song, assimilated through the mixed-races during the colonial era in what is now Peru, Bolivia and Ecuador. This rhythm came from the farmer’s fields and family parties, and then was interpreted and transformed into elegiac and sentimental love songs. The songs had the character of sadness and melancholy and were usually in a minor key.

José Reyes y Siancas (November 15, 1836 / Santo Domingo DR – January 31, 1905) was raised in a cottage, had no formal education and became a soldier. There he studied music with the director of the military band, Juan Bautista Fonseca, learned various musical instruments, but focused primarily on the cello. In 1882, along with Emilio Prud’Homme, he wrote the music for what would later become the national anthem of the Dominican Republic. Premiered in 1883, it achieved greater acclaim with each successive performance in 1884, and 1885. In 1896 it was nominated to be the official anthem, anthem, but it would take another 38 years before the dictator Rafael Trujillo passed a law declaring it the official anthem of the Dominican Republic in 1934.

Ernesto Lecuona (Aug 7, 1896 / Havana – Nov 29, 1963 / Tenerife) graduated from the National Conservatory of Havana with a gold medal when he was sixteen, performed in New York in 1916, and travelled to Spain and Paris in the 1920s.  A prolific composer of songs and music for stage and film, in 1942 he lost the Oscar for best song to “White Christmas”.  He conducted his own orchestra in Carnegie Hall and often incorporated Afro-Cuban rhythms in all media. He emigrated to the United States toward the end of his life and is buried here. It is interesting to note that a great deal of his music was introduced to American audiences by Desi Arnaz on the “I Love Lucy” show.

Paquito D’Rivera (b. 1948, Havana) is a world-class performing artist on clarinet and saxophone. Growing up in Cuba, he was the youngest performing artist to endorse a musical instrument when he signed with Selmer at the age of seven. Working in a number of genres, he is a win­ner of many Grammys but is best known for Latin jazz. After seeking asylum at the American Embassy while on tour in Spain, he received support from Dizzy Gillespie and David Amram, and has lived in the United States since the early 1980s. Respected by musicians in both the jazz and classical worlds, he has won Grammy awards in both categories.

Alfredo da Rocha Viana ‘Pixinguinha’ (Apr 23, 1897/Rio de Janeiro – Feb 7, 1973) A composer, arranger, flutist and saxophonist, he is considered one of the greatest Brazilian composers of popular music within the genre known as choro, integrated with contemporary jazz-like harmonies, Afro-Brazilian rhythms, and sophisticated arrange­ments, introducing it to new audiences and popularizing it as a uniquely Brazilian genre.

Astor Piazzolla (Mar 11, 1921 / Mar del Plata – July 4, 1992 / Buenos Aires) Born in Argentina, Piazzolla’s family moved to New York City from 1925-1936. At eight, his father bought him a bandoneon, and he listened to his father’s tango recordings, was exposed to American jazz as well as classical music, and learned to play J.S. Bach on his instrument. Returning to Argentina, he played in many tango orchestras, and began five years of study with Ginastera. In 1953, he won a grant to study with Nadia Boulanger in Paris. Studying classical composition, including counterpoint, and hearing saxophonist Jerry Mulligan’s octet would make a lasting impression. Upon returning home, he formed the Octeto Buenos Aires in 1955 whose ‘nuevo tango’ used both jazz elements and counterpoint.

This program is supported, in part, by public funds from the New York City Department of Cultural Affairs in partnership with the City Council and the New York State Council on the Arts.