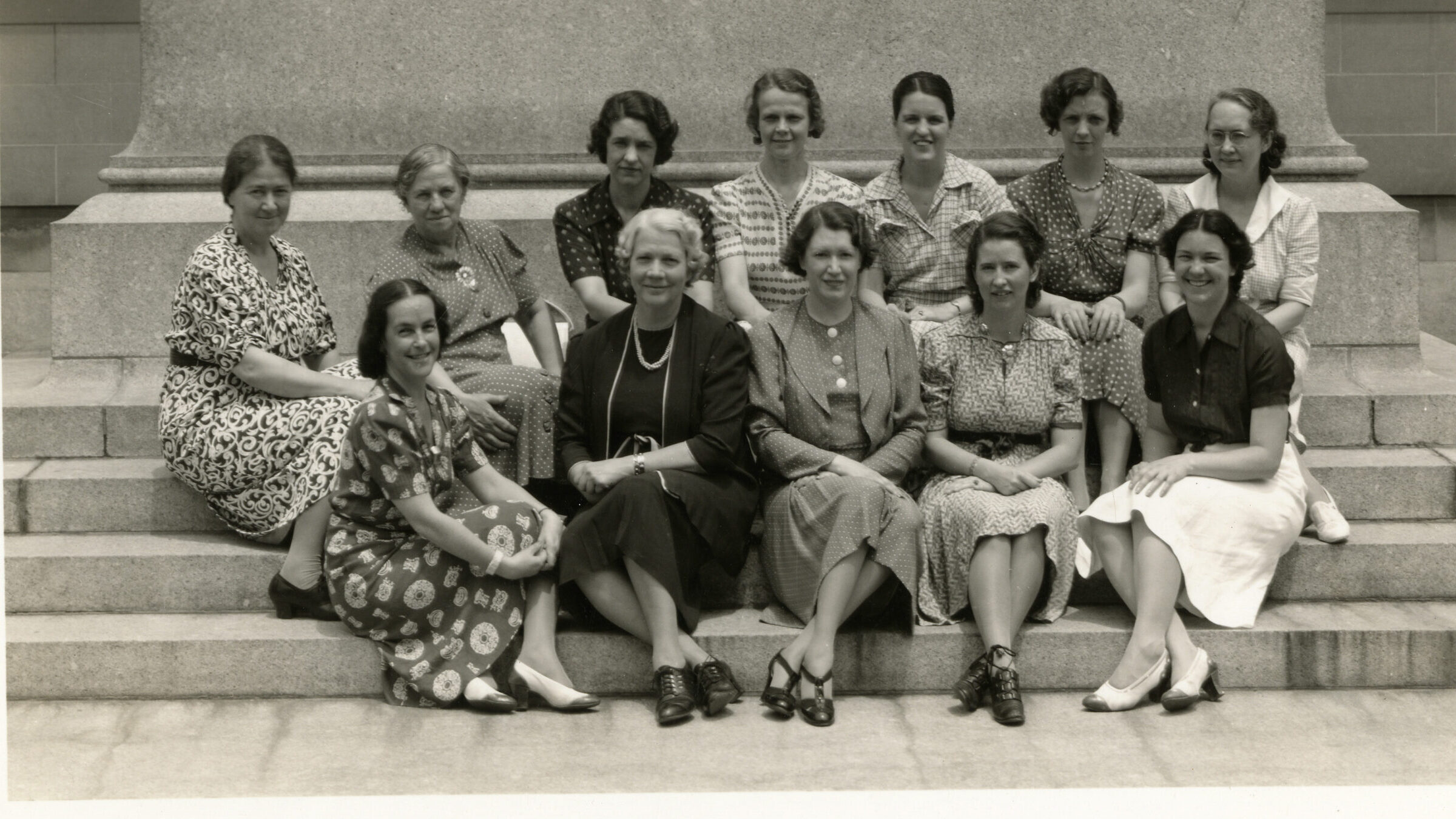 The Women of the Hispanic Society

This year, the Hispanic Society will highlight the female artists, curators, researchers, librarians and writers who have been a part of the Museum & Library throughout its 117-year history, through a brand-new video series, The Women of the Hispanic Society. Join us each month for an in-depth look at the life and work of one of these women.

We’re kicking off this brand-new series of videos, The Women of the Hispanic Society, with Anna Hyatt Huntington, a major sculptor of the early 20th century and the second wife of Hispanic Society Founder, Archer M. Huntington.

Born in Cambridge, Massachusetts in March 1876, Anna Hyatt Huntington’s childhood reflects the intellectual and artistic environment of the leading women in her family. From the beginning, these figures encouraged her artistic aspirations and nurtured a love for nature, which became central to her work. Largely self-taught, Anna studied briefly with Henry Hudson Kitson in Boston and later at the Arts Students League in New York. Recognized as one of the finest American animal sculptors of the day, she created work found throughout the country and around the world, including major museums and private collections.

In 1921, Anna Hyatt met Archer Milton Huntington, founder of the Hispanic Society of America, when he commissioned her to design a medal for the American Academy of Arts and Letters. Two years later, the couple married. Following the marriage, they planned the monumental sculpture on the terrace in front of the Hispanic Society, a vast space splendidly bounded by Beaux-Arts buildings at Broadway and 155th Street. Anna devoted most of her time to this major project. For the majestic equestrian statue at the heart of the program, a larger-than-life El Cid, she placed four life-size male figures at the corners of the heroic knight on horseback and had the base inscribed with lines from Huntington’s translation of the epic Poem of El Cid. Although she had finished modeling the work in 1925, parts of the program were cast later and the ensemble was only completed in the early 1930s. Once installed, the equestrian bronze work immediately became the unofficial symbol of the Hispanic Society.

Notwithstanding public recognition and financial independence, Anna Hyatt suffered the disadvantages of being a woman at her time, especially in terms of the training opportunities and access to art schools. Consequently, many women artists entered associations, collaborated on projects, and shared apartments and studios. Every aspect of Anna Hyatt Huntington’s New York career—professional, critical, and emotional—was sustained by exceptional women.

Born into an aristocratic Galician family with liberal political leanings, Emilia Pardo Bazán received a thorough education that was reinforced by her great love of reading and her tireless desire for knowledge. At the age of sixteen she married the lawyer José Quiroga a similar-minded man, from whom she separated amicably in 1884 to avoid being forced to abandon her literary career. From a very young age, the writer enthusiastically embraced the cultural novelties of the time and actively defended women’s causes. In 1879 she published her first novel, “Pascual López”. Her novels offer a striking image of the Spain of her time in a line clearly indebted to French naturalism. In her masterpiece, “Los pazos de Ulloa” (1886), the writer describes the decadence of a Galician family and their estate, while evoking broader questions of inheritance and civilization.

In 1913, when Emilia Pardo Bazán settled comfortably into the chair for this portrait, the sixty-two-year-old was an internationally well-recognized literary figure. Well dressed in black, albeit simply, she exudes a strong personality. As painted by Sorolla, she stares out with a look that is self-assured, quizzical, and even confrontational. One hand falls over the armrest while the other hand is tucked in against her hip, suggesting a combination of nonchalance and determination completely in keeping with contemporary accounts. Sorolla does not diminish the sitter’s girth but rather imbues it with character so that this portrait must be considered one of the most successful images of Pardo Bazán.

Born in Nebraska, Anderson received her first instruction in photography from her father, Alfred Theodore Anderson, who ran a studio in Kearney specializing in views and portraits. After going to college in Nebraska, she moved to New York City where she attended the Clarence H. White School for Photography from which she received a diploma in 1919. Two years after Anderson graduated from White’s school, The Hispanic Society of America hired her. She was working as an interior decorator when the secretary from the Clarence H. White School called to tell her that the Hispanic Society was looking for a photographer and Clarence White had recommended her. The museum immediately impressed her with its vision and daring as it seemed to capture the spirit of Spain. No less imposing was the man who guided it, Archer M. Huntington. As she recalled that first interview, he was tall with “amused but keen eyes.” He demanded excellence and hard work while admitting that it was all something of an experiment. Apparently, she satisfied him because he wondered if she could start the next day. Instead, they agreed she would begin the following week.

Anderson recorded a “timeless” Spain found principally in small towns and rural regions. There she concentrated on old buildings, local industries, and the community’s public life, generally at festivals or religious rites. Significantly she limited herself to those aspects of the individual’s life carried out in public such as collecting water at a well, whitewashing a house, or the exercise of a profession. Stylistically, her pictures present these daily events with a straightforward tranquility while also suggesting an effortless naturalism. As she traveled through Galicia, Asturias, Extremadura and León, she created a vivid image of Spain, filled with the people who had gladly stopped what they were doing to explain their trades and customs to her. Today her work offers an invaluable resource for all who wish to learn about the country at this time.

When in 1930 Anderson returned from the last of her photographic expeditions, her career at the museum shifted yet again. She now focused on the study of Spanish costume and published several books and articles on the subject. In 1954 she was named Curator of Costume at the Hispanic Society, a post she held until her retirement, almost thirty years later. As important as her research in costume is, today, however, we recognize the appeal of her photographs. When Anderson traveled into the heart of Spain to find her subjects, she was following the instructions of Huntington, a fact which makes her work such a key reflection of the Hispanic Society’s goals as he understood them. Huntington knew the major cities of his time and spent extended periods in Madrid and Seville, yet he believed that the “real Spain” existed outside of its urban centers. In fact, he developed a profound admiration for the rural regions which he visited. For him they evinced a genuine image that differed sharply from that formed by most tourists who saw only the sentimentalized or cliched features of the country. And this was what he wanted the photography collection to record.

Born in Staffordshire, England, Isabel Keith Macdermott emigrated with her family to the town of Trenton, New Jersey in the United States. Educated in various European cities, including one academic year at the University of Cambridge, she left for Chile soon after graduating and worked as a professor in Santiago College. She traveled extensively throughout the country, coming into direct contact with the culture and language of which she became an expert. Upon her return to the United States and before being named Curator of Publications at the Hispanic Society, she worked as an editor at important publishing companies, such as those of D. Appleton-Century Company (1903-1908) and D.C. Heath and Company (1912-1917), occupying chief positions in both the department of Spanish and the department of Latin America, respectively. As an author she wrote textbooks dedicated to the teaching and learning of the Spanish language, aimed at both students and professors.

After Macdermott left the Hispanic Society she was named Managing Editor of the bulletin published by Pan American Union (1921-1929), an organization of which she was also a member. Her role consisted of supervising not only the English edition but also the Spanish and Portuguese versions of the publication, in addition to staying abreast of cultural and political events in Latin America. As an active feminist, she was concerned about the status of women and she became a voice for the problems faced by women. In 1929 she left her post for health reasons and joined the board at Santiago College where she had previously worked as a professor. Isabel Keith Macdermott remains one of many women who’s life and work left a valuable footprint in the history of the museum & library.