The World Renewed. Narrated by Matthew Spady, Historian and Author of "The Neighborhood Manhattan Forgot"

The world map, or planisphere, by Giovanni (Juan) Vespucci is one of the most impressive nautical charts produced during the Age of Exploration. Juan Vespucci was the nephew of Amerigo Vespucci (1454–1512), the Florentine explorer, navigator, and cartographer appointed as the first pilot major of the Casa de Contratación in Seville in 1508. Established in 1503 by Queen Isabella, the Casa de Contratación was responsible for overseeing all exploration, colonization, and commerce between Spain and its rapidly expanding empire in the Americas. One of its most important functions was to maintain and update a master nautical chart, the padrón real, from which copies were made for pilots sailing to the Americas. As pilot major, one of the first tasks assigned to Amerigo Vespucci was to produce the first padrón real.

Upon the death of his uncle in 1512, Juan Vespucci, an experienced pilot and cartographer, inherited all of his uncle’s charts, maps, and navigational instruments (Cerezo Martínez 1994, p. 137). In 1512 he was appointed pilot of the Casa de Contratación, was licensed to sell copies of the padrón real to pilots, and was commissioned to assist the new pilot major Juan Díaz de Solís in revising the padrón real (Sandman 2007, pp. 1132, 1139). In 1515 his friend Pietro Martire d’Anghiera (1457–1526), the Italian historian who wrote the first history of the Spanish discoveries in the Americas, recounted that Juan Vespucci had served as pilot of the flagship of the colonizing expedition to Panama led by Pedro Arias (Pedrarias) Dávila in 1514 (Anghiera 1912, p. 138). When the Junta de Badajoz-Elvas was convened in 1524 to resolve the dispute on the location of the Line of Demarcation established in the Treaty of Tordesillas (1494) that divided claims to newly discovered lands between Spain and Portugal, Vespucci was sent as one of the Spanish experts along with Hernando Colón, Sebastian Cabot, and Juan Sebastián Elcano (Cerezo Martínez 1994, p. 178 n. 50).

Vespucci was relieved of his post at the Casa de Contratación in 1525 for having served as a spy for the Medici in Florence (Varela 1988, p. 80), yet on 26 June 1526, he was appointed by royal decree an examiner of pilots in substitution for the pilot major Sebastian Cabot during his absence, although there is no record that he served in this capacity (Sevilla, Archivo General de Indias [AGI], Indiferente, 421, L. 11, fol. 62r–62v). On 14 September 1526, the Council of the Indies confirmed a license for Vespucci and Francisco Lizaur to take two caravels to “las perlas,” the Pearl Coast of eastern Venezuela and the island of Cubagua ( AGI, Indiferente, 421, L. 11, fol. 186v–87r), and again on 29 March 1527, granted a license to Juan Vespucci for an unarmed caravel to travel to the Indies in the company of other vessels (AGI, Indiferente, 421, L. 12, fol. 50r). After this date there is no further record of him.

Vespucci’s World Map of 1526 is an ornate copy of the padrón real and probably was intended as a gift for Charles V on his marriage to Isabella of Portugal on 10 March 1526, in Seville. The chart bears the Habsburg coat-of-arms of Charles V above North America and is signed at left: “Ju[an] Vespuchi piloto desus ma[ges]ta[des] me fezit en seujlla [a]ño d[e] 1526.” The planisphere displays two circles of 32-point compass roses and intersecting rhumb lines emanating from the compass roses across the entire surface. Spanish and Portuguese flags are used to reflect territorial claims and sea routes based on the disputed Line of Demarcation, not delineated, that bisected Brazil. Vespucci added interior geographical details and curiosities such as the harvest of Brazil wood along the coast of Brazil, camels and elephants in Africa, the Tower of Babel collapsing in the Near East, and like medieval mappaemundi the Red Sea is colored red. More significantly, Vespucci included details of recent Spanish exploration and conquest in the Americas: the Strait of Magellan (1520); Mexico City (1521); and the coastal expedition from Florida north to South Carolina organized by Lucas Vázquez de Ayllón (1521), for whom Vespucci named the region “T[ie]rra Nueua de Ayllon.”

Only two holograph charts by Juan Vespucci are known, his World Map (1526) and a chart of the Mediterranean (1520) in the Archivo General de Indias in Seville (AGI, MP-Europa Africa, 125; Cerezo Martínez 1994, pp. 42, n. 56, 47). A slightly larger planisphere (112 x 262 cm) dated 1523, sometimes attributed to Juan Vespucci or Nuño García Toreno, is in the Biblioteca Reale, Turin (inv. Col. O.XVI.1). Juan Vespucci also produced the first printed double hemisphere world map on a polar projection, Totius orbis descriptio, which is known in two states, each in unique copies; the undated first state was in the library of Count Giacomo Manzoni, Rome, but disappeared after his death in 1889 (Nordenskiöld 1897, p. 153, pl. 40); and the second state, revised and dated 1524, is located in the Houghton Library, Harvard University, Cambridge MA (Houghton, inv. 51-2573; Nebenzahl 1990, pp. 78–79, pl. 25). 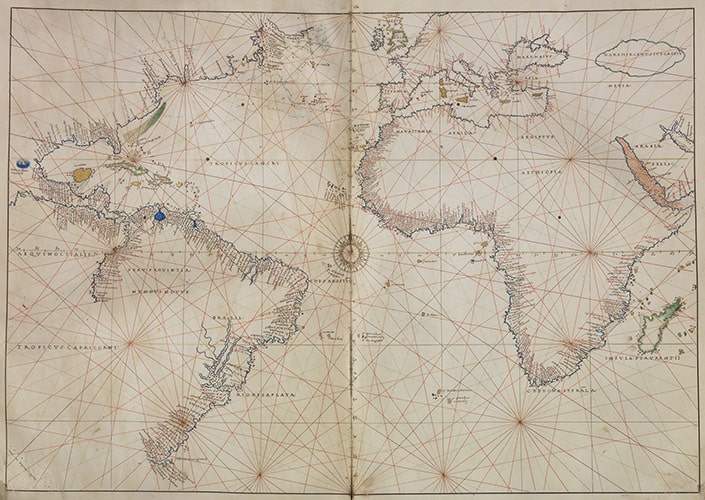 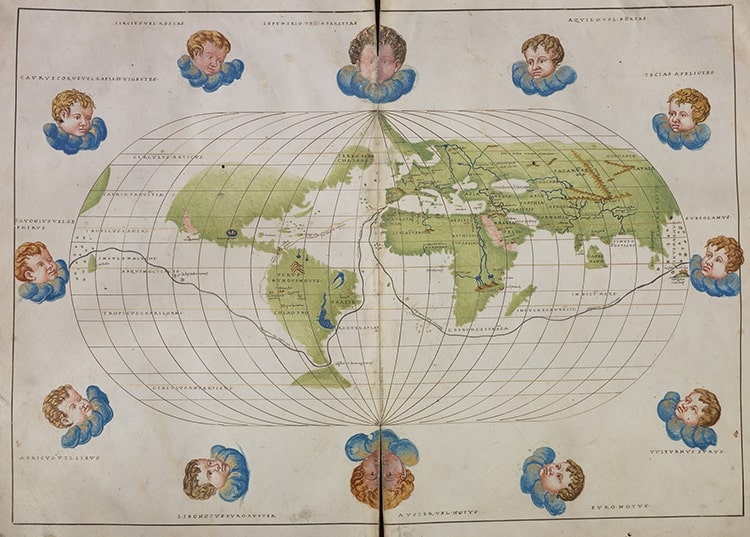 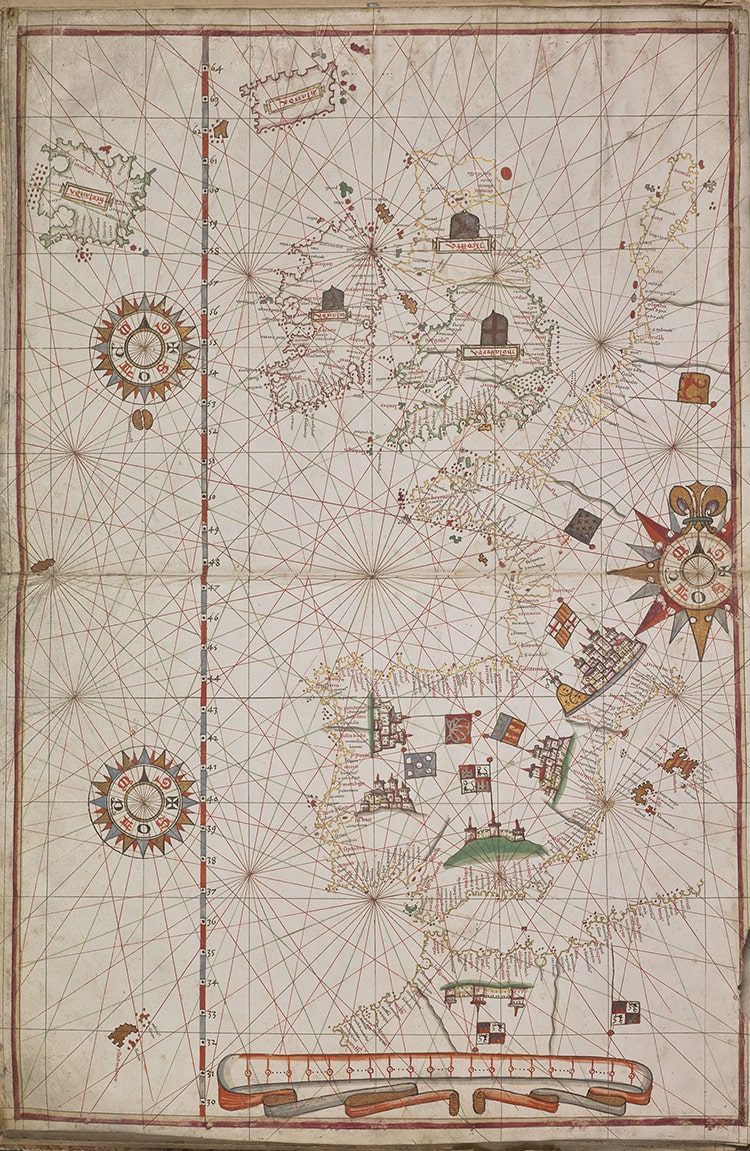 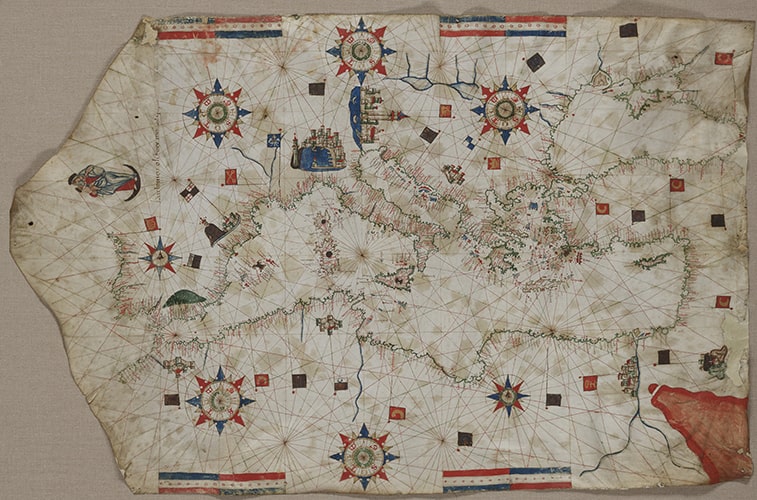 Portolan chart of the Mediterranean, Black Sea, and Atlantic (Finisterre to Cape Nun),1552. Ink and color on parchment