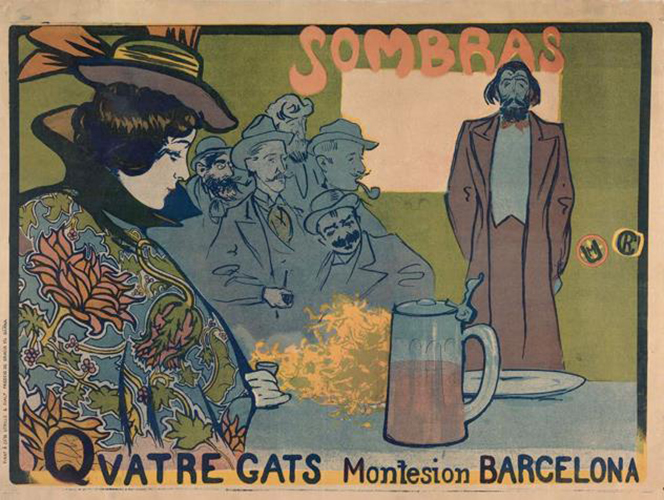 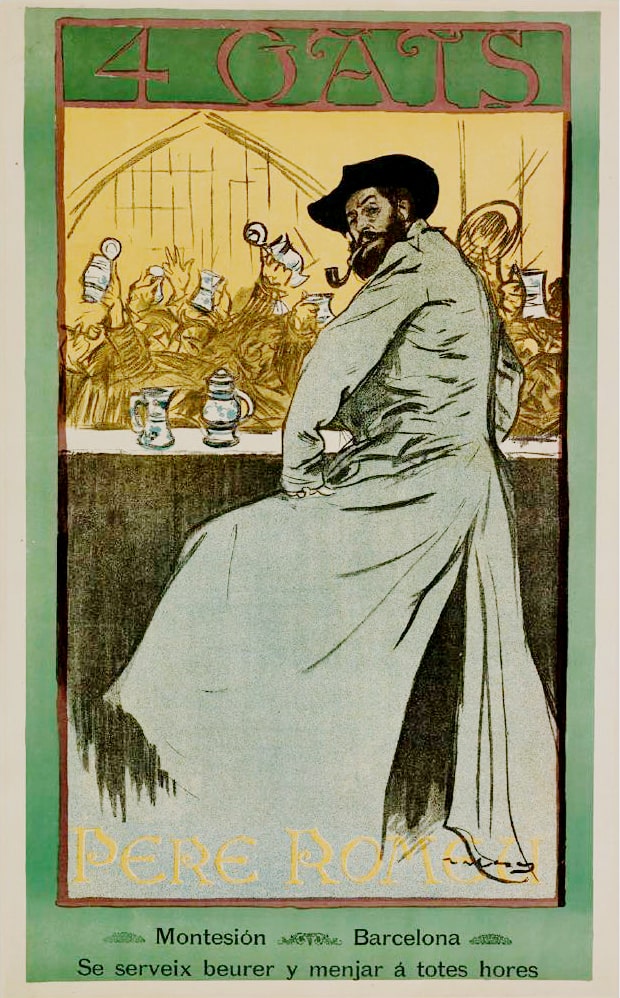 Further treasures among the Hispanic Society’s prints are these three posters dating 1897, 1898, and 1900. Created in Barcelona, they mark a highpoint in the history of graphic art in Spain and Barcelona in particular, as artists of the first rank took up posters as a serious endeavor and created images of striking beauty. Many of their works are now considered emblematic of the era. Of those who engaged in poster art, none achieved more spectacular results than Ramon Casas. Born in 1866 into a family of wealthy industrialists, he traveled to France often where he absorbed the latest styles, above all those of Edgar Degas (1834–1917) and James Abbott McNeill Whistler ( 1834–1903 ), which he incorporated into his own images of modern life in Barcelona. In these three posters, Casas announces various activities at the bar the Quatre Gats. Open for a short period from 1897 to 1903, it was part of an effort by Ramon Casas and a group of his friends, Pere Romeu (1862–1908), and painters Miquel Utrillo (1862–1934) and Santiago Rusiñol (1861–1931), to create an environment hospitable for art like that which they had experienced in Paris. In Rusiñol’s words:

Rusiñol’s statement also suggests the ethos of Modernisme, the name of the movement which Casas and Rusiñol sponsored. More an approach than a single style, Modernisme wanted to break free of the aesthetic conservatism then prevailing in Barcelona, advocating new attitudes toward art and picture making. Like many other developments in Europe at the turn of the century, it blended various tendencies: Japonisme (an interest in things Japanese), the so-called impressionism of Whistler and Degas, Symbolism, Naturalism, and the decorative elegance of Art Nouveau. Catalan artists and writers joined these strands in a distinctive manner to create major works. Quatre Gats soon became more than a café for like-minded artists and intellectuals, as it served as an active cultural center that held theatrical events and art exhibitions. This fertile environment provided a springboard for many other artists, of whom the most famous today is Pablo Picasso (1881–1973). The poster Sombras Quatre Gats depicts an event at the café: a shadow puppet theater. At these events, cutout shapes were moved in front of a lit screen thus creating shadows while performers sang or recited. Two of the founders of the café, Romeu and Utrillo had seen such plays in Paris and were anxious to present them at the Quatre Gats. The productions they mounted involved all the leading cultural figures of the city including writers, musicians, and of course Casas, Utrillo and Romeu. In the poster, Casas (with his friend Utrillo’s help) creates another effortless masterpiece in design. To the left sits a lady clad in an elegant mantón de Manila (Utrillo’s principal contribution to the poster), while behind her table and at the center are five figures outlined in pale blue, the artists, Ramon Casas, Miguel Utrillo, Santiago Rusiñol, Ignacio Zuloaga (1870–1945), and Eliseo Meifrén (1859–1940). To the right, Romeu, painted in full color, stands in front of the screen against which the shadows will appear, and above the screen are the letters announcing the shadows.

The image vividly, almost effortlessly evokes the event, but Casas has constructed the composition with great care. The juxtaposition of the five artists, Romeu, and the screen evokes the process of projecting the cutouts and the shadows they create. The pairing of the five artists faintly rendered in blue and Romeu in his brown suit underscores the contrast between the shadows and the world of color. In his affectionate and humorous portraits of the five artists and Romeu, Casas deftly adds a subtle commentary. In Puchinells 4 Gats, Ramon Casas announces the performance of a puppet play for children at the Quatre Gats. At first glance the image seems simple, but a deft sense of humor and a masterful appreciation of picture making lie behind it. A marionette on the left holds a stick with which he has beaten the figure on the right. The diagonal of the stick contrasts with the stiff vertical and horizontal lines of the two puppets. Casas adroitly renders them to suggest their rigidity while also hinting at the action that has just occurred. His rendering of the arms and hands brilliantly evokes the way these characters might have moved. He has applied the color in bold flat planes which vividly enhance the composition as it evokes the two combatants, the theater front draped with cloth over which the first puppet falls, and the background behind them. The letters are then incorporated with easy skill into the open space. As a final touch, Casas includes a portrait of his friend Pere Romeu as the figure of Puchinellis or Punch. Casas’s depiction of Romeu is in many ways the oddest. He has so heightened the man’s distinctive appearance that with its gaunt face and strong lines in his forehead, it almost takes on the quality of caricature. By all accounts, Romeu inspired genuine affection from his friends and none more than Casas. The two portraits that Casas included in paintings for the Quatre Gats amply attest to this affection (Ramon Casas and Pere Romeu on a Twin Bike, or Ramon Casas and Pere Romeu in a Car, both in Barcelona, Museu Nacional d’Art de Catalunya, inv.069806-000 and 214453-000, respectively). Casas went on to create yet another image of his friend, Quatre Gats Pere Romeu, in the third and last poster he made for the Quatre Gats. Sitting behind the bar, Romeu looks out appraisingly, perhaps quizzically, while in the background the sketchily-drawn public carouses, lifting their tankards up. As we look back at Romeu, Casas has ingeniously placed us in an unusual position: as if we are behind the bar but also invited to enter the tavern and join its riotous festivities. 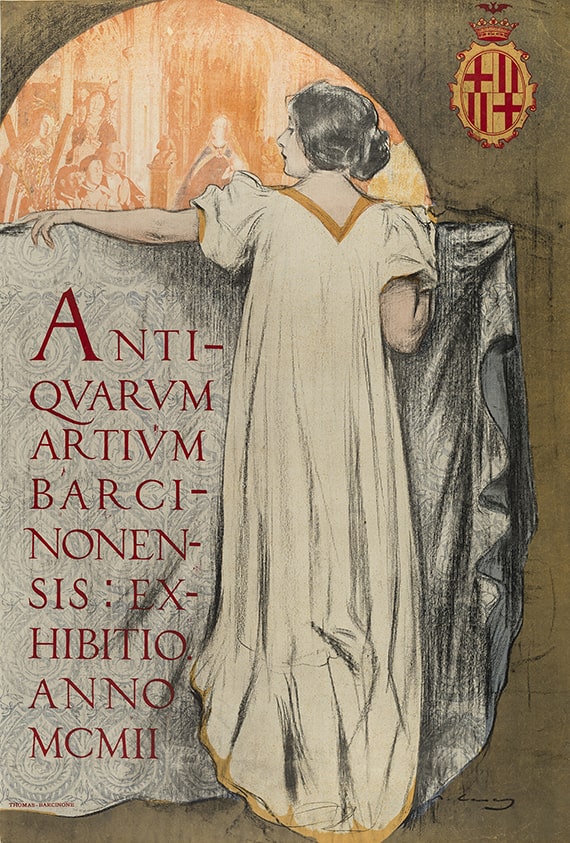 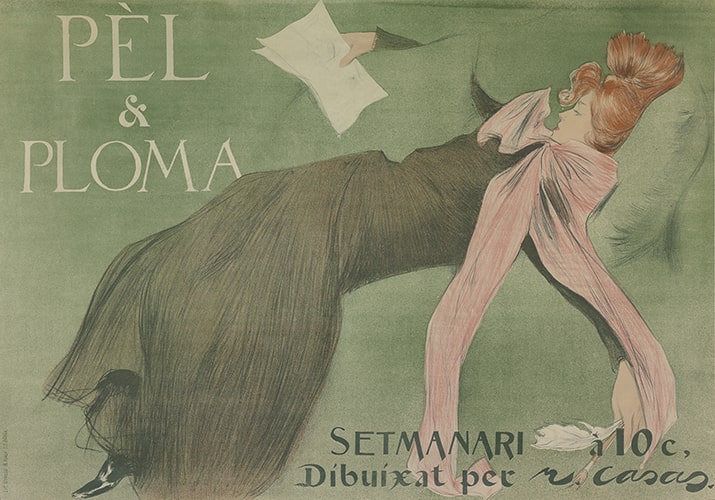 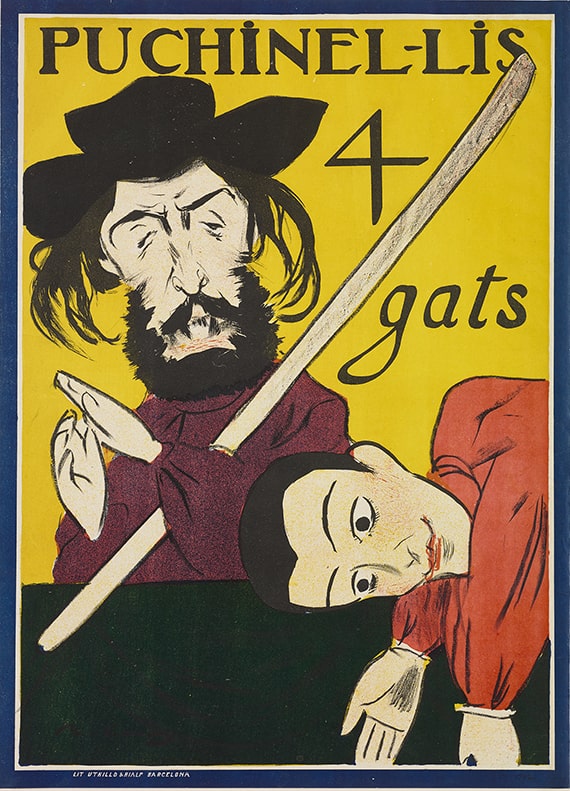