Signed to the right (fragmentary), “Fortuny”

New York, The Hispanic Society of America, A303 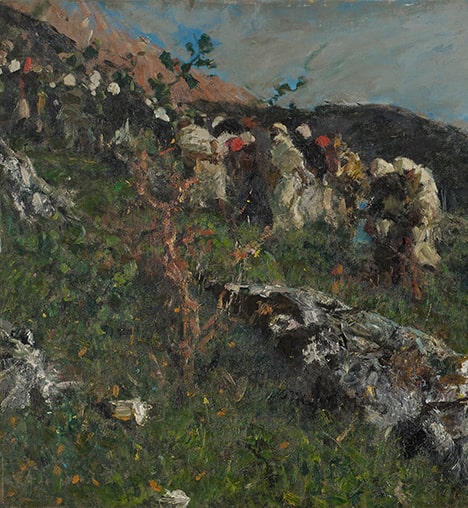 Mariano Fortuny was educated in the visual arts since childhood and at the Escuela de Bellas Artes in Barcelona, 1853–57. Following a fellowship to Rome 1858–59, he travelled to Morocco from February to April 1860 as a “battlefield artist” commissioned by the provincial government of Barcelona. The trip, and a second one from September to December 1862, cemented his interest in Islamic culture (including in Spain). In 1861–62 and 1863– 64, he worked in Rome and visited Florence, center of the proto-Impressionist Italian group called the Macchiaioli. He lived in Paris, 1865–66, where he met Raimundo de Madrazo (1841–1920), and married Madrazo’s sister, Cecilia, in 1867. They settled in Rome from mid-1868 but traveled frequently, residing in Paris in 1869–70 and often visiting Madrid and Granada. His 1870 exhibition of costumbrista pictures at Goupil & Cie. in Paris was an astonishing success, even as his other works continued to tend strongly towards what would come to be Impressionism. He made another brief trip to Morocco in October 1871. Fortuny’s untimely death in 1874 was one of the greatest tragedies to affect 19th-century European painting.

Arabs Ascending a Hill seems at first glance to depict a scene Fortuny witnessed in Morocco. A line of dark-skinned captives with hands bound behind their backs is urged up a steep hill by a Moroccan soldier with a rifle and a colorful uniform, his cream-colored cape billowing in a stiff wind. Another armed soldier on horseback leads other captives over the crest of the hill at right, as smoke rises in the distance from a town on the seacoast. However, it is difficult to equate the drama shown in the picture to scenes Fortuny, “embedded” in the Spanish army, might have experienced in 1860. Perhaps it was inspired by an event ( or a report Fortuny heard) in the internecine strife following the Spanish evacuation of Tetuan in May of 1862.

Artistically, Arabs Ascending a Hill, is based in part on drawings, watercolors, and oil sketches from Fortuny’s Moroccan trips in 1860 and 1862, and more closely, on two watercolors from ca. 1862–64, when Fortuny returned from Morocco to Rome to work intensively on his monumental The Battle of Tetuan (300 x 972 cm, Barcelona, Museu Nacional d’Art de Catalunya, inv. 010695-000), left unfinished at his death in 1874.

While the palette and brushwork on the figure of the Moroccan soldier at the center of the New York picture find parallels in the equestrian figures in the foreground of the Tetuan composition, the actual pose of the figure, with his rifle across his shoulders, is the same as the figure in an oil sketch and a large-scale watercolor, both painted in Paris in 1870 (The Art Institute of Chicago, inv. 1983.382, and Museo de Montserrat, inv. R.N. 200.419, respectively). The figure repeats in two works datable to 1872–73 (see Barón [ed.] 2017, pp. 228–33, 303–5, and 310–12), which led Ana Gutiérrez to suggest a date of ca. 1872, after Fortuny’s 1871 trip to Morocco.

It is more likely, however, that the picture was begun in Rome ca. 1864–66 and finished subsequently, possibly as early as 1870 in Paris, but more probably in Granada, 1871–72. Fortuny’s brother-in-law, Raimundo de Madrazo y Garreta, who subsequently owned the work, coincided at Paris in 1870 and Granada, 1870–72. The work was not in Fortuny’s estate sale, 1875, so Madrazo acquired the work before Fortuny’s death on 21 November 1874. (Fortuny was also briefly in Paris in early November 1874, to cancel his contract with Goupil, but was unlikely to have brought any works with him.) 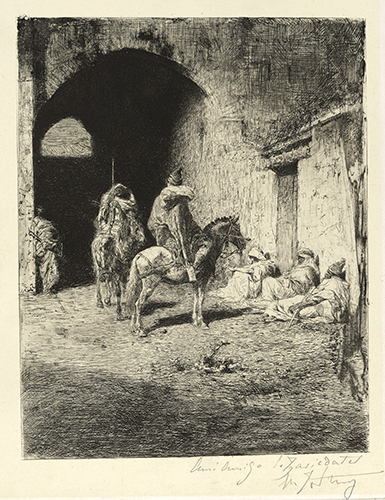 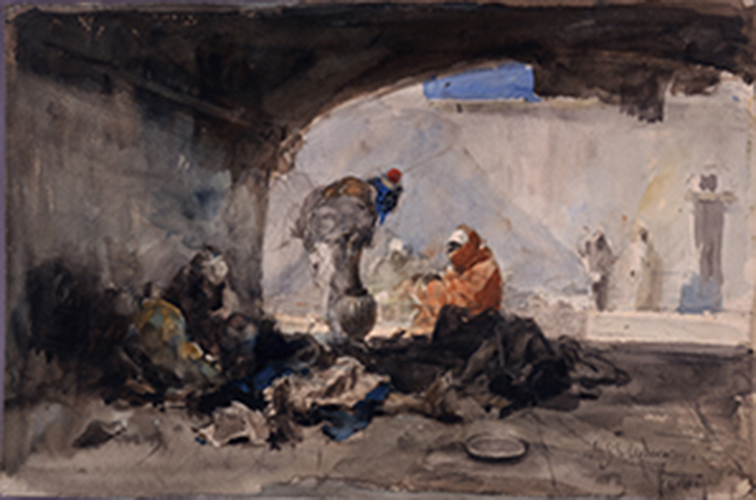 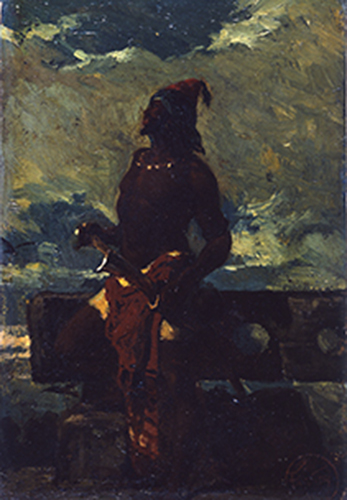